Going into Marvel’s latest film, to say I was skeptical was putting it mildly. While you shouldn’t let rumours or publicity ruin a film, what I was hearing about Ant-Man prior to its release was not very reassuring. The departure of Edgar Wright, rumours about a constantly changing script,  a lack of success with test audiences, it wasn’t looking good for the newest hero in the Marvel cinematic universe. As a result, my expectations were lowered, or shrunk may be more appropriate.

Now, this is normally the part when I express my complete surprise with the film and how Marvel truly exceeded my expectations. But the reality is that while Ant-Man  is a nice change of pace from the rest of the Marvel universe, it isn’t the amazing surprise that Guardians of the Galaxy was last year. What we get is some impressive CG, some great laughs, but overall a predictable story that sometimes feels like a missed opportunity.

The first problem with Ant-Man’s story is pacing. The film seems to take the long way round to get to any key plot point. In fact the main character Scott Lang has a preamble leading up to finding the Ant-Man suit that takes about 30 minutes, most of which is just ham-fisted exposition to show how miserable his life is.

The second issue has to do with the characters, specifically the lack of depth. Now to be fair, comic book characters don’t traditionally have many dimensions to them, most of them are drawn after all. Sorry bad joke. But all kidding aside, I can’t help but feel that the characters of Ant-Man are somewhat one-note, especially the main villain Darren Cross. That doesn’t mean that the performances are just one note. Despite the poor story and lack of characterization for some of the characters, everyone gives great performances in the film, especially Paul Rudd as Scott Lang and Michael Douglas as Hank Pym, the original Ant-Man. 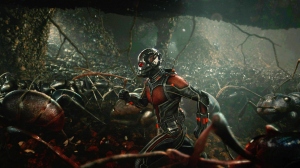 But story aside, the rest of the film is actually a lot of fun. While the action scenes are quid pro quo for the studio, it’s the CGI that alone might be worth the price of admission. Marvel once again shows that if there’s one thing it can do well it’s special effects. One aspect of the movie I wasn’t sure about originally was any sequences that would involve ants. However, any scene with the ants became my favourite part of the film. Clearly I wouldn’t be very imaginative if I had the ability to command swarms of insects with my mind, but Ant-Man thankfully shows that the titular hero can definitely hold his own with his tools. They’re used in some very entertaining and ingenious ways, all thanks to  Marvel’s CGI prowess.

While Edgar Wright might have left the director’s chair due to creative differences with Marvel, his influence undoubtly made the film as enjoyable as it was. One of the original rumours prior to the release of the film; again rumour, was that the original cut of the film had most of the Wright material axed before being added back in after the success of Guardians of the Galaxy. While I don’t know at the writing of this review if that’s true or not, the inclusion of said material definitely made my experience more enjoyable. The jokes exponentially get funnier as the film progresses and even show how awesome a hero Ant-Man can be.

While I’m glad that we have another hero worthy of the Marvel Cinematic Universe, it’s a pity that his first outing didn’t quite hit the mark.It’s definitely a shame that Edgar Wright couldn’t see his vision all the way through, one can’t help but wonder how different the film would have been if that hadn’t happened. But, that doesn’t mean that Ant-Man isn’t worth seeing, it definitely is for those who have seen the other films or are fans of Edgar Wright’s work. It just goes to show that even Marvel can’t get every superhero film right with it’s formula.

2 thoughts on “Ant-Man Review: A Mountain Out of an Ant Hill”