For the past few days, I’ve been asked by co-workers, friends, and family how my trip to Austin was. As I alluded to in my last post, written when I was on the train back to downtown Toronto, it was incredible. But with getting back to work and fighting what I believe to be “Con Flu“, I haven’t really had time to compile my thoughts and what I thought were the highlights of the trip. But, I feel I’ve had enough time to think about it and write about my Austin adventures. This first post will cover the days before RTX, essentially when I left on August 4th to August 6th. There’s a lot to talk about so let’s jump right in.

While I did know some of the people I was flying down with, one of the best parts of the entire trip was meeting tons of new people who were also attending. Our flight from Toronto to Austin had quite a few people who would also be going to RTX as well. It was so much fun getting to know my fellow con-goers and excitedly talk about what we hoped to see and what we were going to do while we were there. Even after getting to Austin, I got meet some really cool people who I hope to keep in touch with, even if I see them only once a year. If any of you are reading, it was a pleasure meeting you.

So fun fact about Austin in August, it’s really hot. Like stupidly hot. I’m pretty sure the coolest it was the entire trip was around 27C at night (that’s about 80F for you Americans), where as during the day it was more like 38C (100F). Something fun about using the Fahrenheit temperature scale is that even to someone who knows only Celsius, 100 is really hot. Now to some people that’s the norm at this time of year, but to us Canadians from the great white north… it’s not so pleasant. Although in the end I handled it pretty well, the heat felt disgusting the moment I got off the plane. On the bright side, every building I went into was beautifully air conditioned to about 20 degrees. A friend I made on the trip said that people sometimes bring sweaters to wear inside buildings, to which the Canadians yelled back “shut up you have no idea how amazing this is”. But I don’t think you’re reading this to hear me bitch about the weather. But at least the sun was shining the entire trip and I got to work on my (farmer’s) tan.

While I didn’t get to explore as much of the city as I wanted to (another excuse to come back), I did get to see some great parts of the city. Most notably the Texas State Capitol, which I think is a great spot for photos if you’re looking to take some on your trip. I walked around south of the Colorado River, and while you risk getting fired alive by the sun on the bridges that go across the river, it’s also another awesome spot for pictures.

There’s also Barton Springs Pool, which is essentially a giant natural swimming pool in the City of Austin. A fantastic way to cool off in the intense summer heat, also ended up meeting some more con attendees while I was there.

But it wouldn’t also be a trip to Austin without some great places to eat. Frank’s, Salt Lick, Amy’s Ice Cream, Casino El Camino, and Eureka were probably my favourite places to eat the whole trip. That’s not even including some other places that I definitely have to check out next year: Whataburger and Home Slice Pizza, to name a few.

In addition to great food is some pretty fun bars. Most of them are on 6th street, which on weekends is closed off from traffic so the entire street becomes an awesome place to spend an evening with friends. Personal favourites include Recess, which is a bar and an arcade (great place to use all your extra quarters), and Shakespeare a pub with a really cool roof space with a view out to the street. 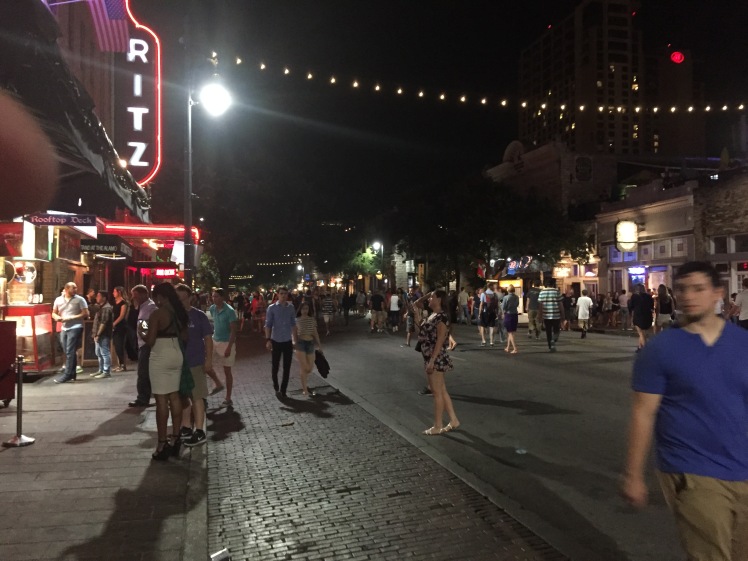 Plus there are also bats, like real bats. Awesome!

Now, probably one of the coolest part of the trip was attending RT SideQuest’s Cocktail Party and Charity Auction. A chance to mingle with fellow RTX Attendees, bid on some really cool auction items for charity (bid on one thing, was almost immediately out bid), and also talk to some of the Rooster Teeth Staff without the craziness of the convention. Also any chance to dress a little more formally gets me excited. I had such a good time at this event that if I come back next year I’ll definitely be getting a ticket. Hopefully next time I’ll have enough spending money that I’ll be able to win something.

The Calm Before the Storm

If there’s one thing I learned during the Pre-RTX days, it’s that there’s so much to do in Austin. So much, that I didn’t get a chance to experience it while I was there. If I go back to Austin, I’d probably do two trips. One for the convention, the other for being touristy.

But with the convention ahead, and no expectations of what was going to happen, the possibilities seemed infinite.