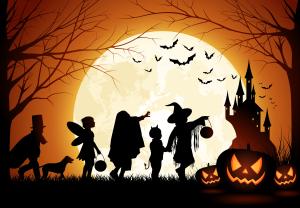 I’m not writing this to prove a point or anything, more to my thoughts on paper so to speak. Or maybe I’m asking a question that I don’t care whether or not I get an answer to.

When you’re a kid, halloween is one of the best parts of the year. You get to dress up, get lots of free candy, scare people, scare people and gets lots of free candy. There’s a lot to love about Halloween. But I find myself wondering whether or I’m as excited for it this year as I have been in the past. Perhaps it’s because I’ve been so much busier this month. Between trips out of town and entertaining out of town guests, what little free time I’ve had to get into “the spirit of things” has instead turned into reusing a costume that I used five years ago just so that I can go to the Halloween parities that I’m both excited for and sort of regretting hastily accepting the invitation. It’s not that I’m bothered by having to use an old costume, more that Halloween seems to be more and more of a chore than what it used to be. Perhaps that is merely part of growing up, and Halloween is merely a children’s holiday. I know many of my friends are both living this year’s Halloween to the fullest, while others are taking the “grown-up” approach to it and just treat it like any other day.

But maybe I just have to be more prepared for next year. I had originally intended to go as the Riddler this year, but am instead reprising my role as the grouch with a heart of gold, Dr. Leonard “Bones” McCoy. Or at least that’s the plan, even I’m beginning to rethink the idea for something. Not like I have much time on my side. On the bright side, at least there’s always unsold halloween candy that will be super cheap. Sure going to get my dosage of early onset diabetes for sure. So is it just for kids, or is it something us ‘old’ folk can enjoy? Hard to say, maybe next year I’ll know for sure. In the meantime I’m doctor, not a party-pooper.

One thought on “A Halloween Quandry”