If you missed last week’s Nintendo Direct, you might be wondering based on the title “what the hell is an Octopath Traveller?” Odd name aside, What you’re looking at is another modern take on the JRPG genre from the minds behind the equally innovative Bravely Default. But based on the recent demo, Octopath Traveller seems to be even more ground-breaking than its older sibling. 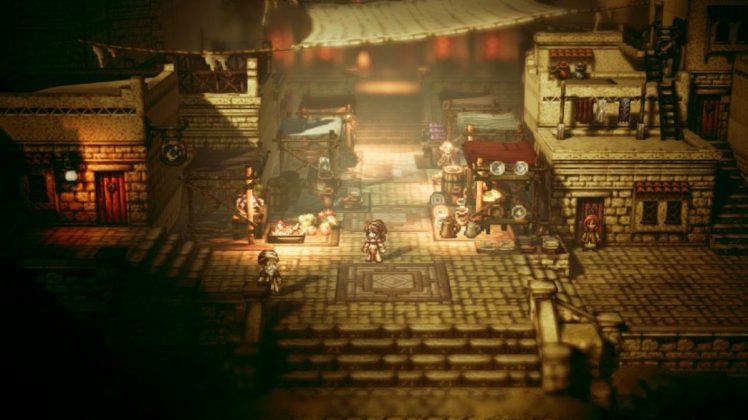 To start with the basics, Octopath Traveller is a JRPG exclusive to the Nintendo Switch. Technically the full working title for the game is Project Octopath Traveller, but with a name that ridiculous sounding you might as well try to make sound better until we learn the real name. At first glance, you can tell that Octopath is a very unique looking game. The development team has nicknamed the games unique aesthetic ‘HD-2D’. Through a combination of 16-bit sprites, pixel art, and environments rendered using Unreal Engine 4, the world of Octopath Traveler looks like a diorama or pop-book in which our 16-bit heroes inhabit. In addition to the surprisingly beautiful graphical mashup, the light brought in through Unreal brings additional depth creating a game that looks like nothing else. Sand sparkles like jewels in the sun, running water reflects light through its ripples, it’s a feast for the eyes. Characters in even carry lanterns through darkened dungeons, adding another source of light to interact with and enhance the lighting effects even further. The effect does have its limits and the light bloom effect occasionally looks off in very dark rooms. But I believe that’s something that will get worked on further along in development. That aside, Octopath isn’t just another pretty face. 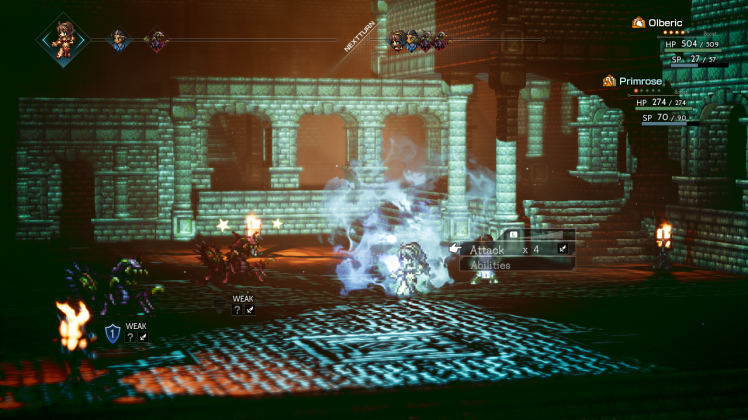 Like Bravely Default, Octopath’s Traveller‘s battle system is turn-based combat streamlined for the modern age. Every turn characters earn boost points to use in combination with their abilities. These are then used for multiple attacks or to enhance an ability to make it stronger. You can choose to burn boost points each turn or use a basic ability and save your boost points for later in battle. Meanwhile, your enemies have a number of defense points that prevent them from taking lots of damage. Every enemy is weak to particular attributes that attacks or spells have. It’s then a matter or trial and error to find out which enemies are weak to what.  Luckily, the game will save this information for you so at a quick glance you can see what you should use in combat. Once you exploit an enemy’s weakness, it will lose a defense point. When an enemy’s defense reaches zero, they will be unable to do anything and will be vulnerable to massive damage for a turn. 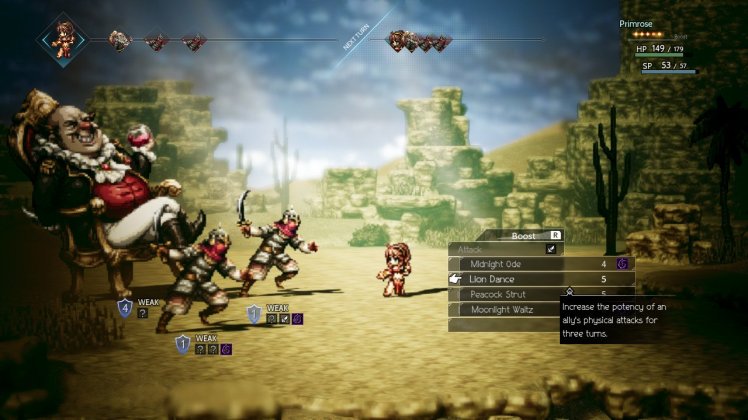 If you’re familiar with Bravely Default’s combat system involving Brave points, it will feel vaguely similar. It is, however, a noticeably simpler system than Bravely Default’s. That’s not a bad thing, as it has its own kind of challenge with trying to figure out weaknesses of enemies. Of course, this being a demo there’s only so much we can glean from the game in its current state. I for one am looking forward to what kind of exciting challenges the full game has for us in terms combat.

But perhaps for me, the most interesting element of Octopath Traveller is the promise of 8 unique heroes to play as and see their stories unfold as you see fit. Each character in addition to distinct combat and class abilities has what is known as a “Path Action.” Each Path Action is a unique ability that you use with NPCs to move the story forward. For example Olberic the knight can challenge almost any NPC to a duel, and I do mean any. You’d be surprised when it turns out that the shopkeeper’s assistant is actually harder to fight than the bosses. These actions are said to drive the story forward in ways that revolve around your decisions rather than a preset path, which sounds very intriguing for a JRPG.

When you start a new game (or at least for the demo, unclear how the full version will work), you pick a hero to be the main protagonist. The demo has two available, the knight Olbreic and the dancer Primrose. I first played as Olberic, since it seemed like the way to go to be introduced to the world of Octopath Traveller. His story was pretty generic, not bad by any means but nothing I hadn’t seen before. But being a knight, there was a lot more emphasis on combat which I enjoy playing. Once his story ended, I started a new game and picked Primrose, not sure what to expect. 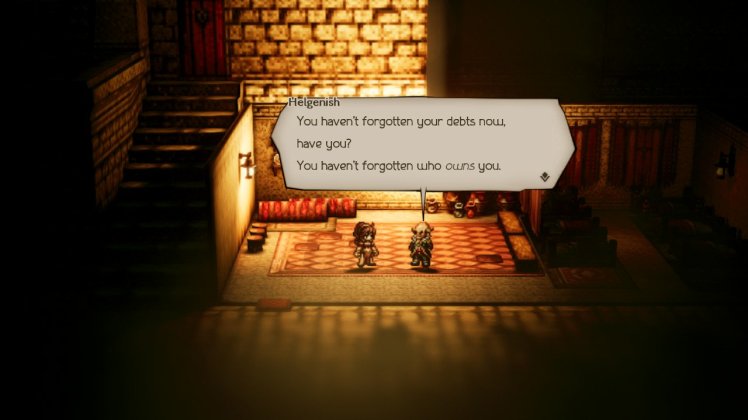 When it was announced that Primrose was one of the characters you could pick in the demo, I definitely dismissed a first her solely based on my preconceived notions of the Dancer class in RPGs, being solely for support and nothing else. Boy, was I glad to be wrong. Without getting into spoilers, not only is Primrose a badass character, but her story is quite mature and dark for a game inspired by classic 16-bit JRPGs. Even the dialogue between characters in Primrose’s story doesn’t shy away from mature subject matter which is incredibly refreshing. Her Path Action ability is the ability to allure almost any NPC to follow her and essentially do her bidding. This these allured (read seduced) NPCs can also be used as allies in combat, each with a different ability either for attack or support. She alone is another example of how the game is redefining JRPG conventions.

The demo itself is wonderfully hefty. Once you beat the boss of a hero’s demo, you can meet up with the hero you didn’t select and continue to explore the world that’s explorable in the demo. There’s an extra dungeon with difficult monsters to fights, and there are several side quests to complete for extra loot. There’s voice-acting in both English and Japanese for all important characters and major story scenes, and to top it all off the music is simply amazing. Even with what we assume is a small sample of the full game’s music, I want the soundtrack right now.

A survey was sent to demo players by Nintendo and Square Enix to get feedback. I summarized what I loved and what I thought needed work: more voice-acting, better tutorials, and a better map. But as far as demos and first impressions go, this has been one of the best I’ve played. The game is due to be released next year, so whatever they call Octopath Traveller I hopefully don’t have to wait too much longer for the full game. 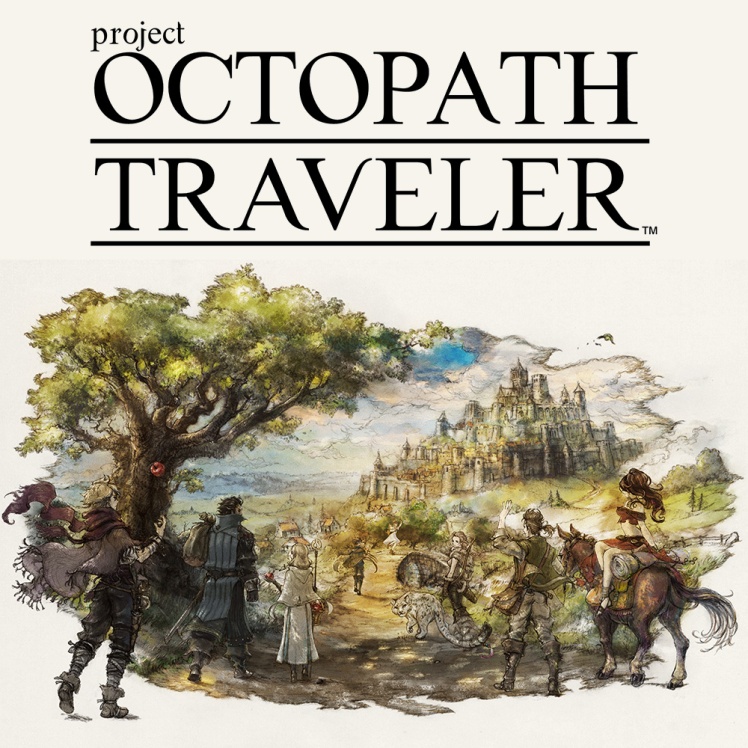